Posted on January 9, 2015 by fragmentsandthoughts 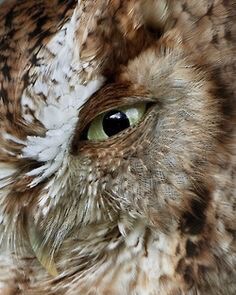 8 Jan 14
Lesson 5 – A Course in Miracles
The blue jays gathered in the witch hazel branches, their voices raucous, incessant. Additional jays flew in from nearby yards, each adding to the message. They squawked and fluttered in short agitated circles. All focused on something low in a large blue spruce. Suspecting the neighbor’s cat, the dog and I went out to shoo it away.

A small brown bird rose from the frozen grass at the tree’s drip line and flew into a different spruce. A hawk, I assumed, until the jays chased it to squawk and dive at the branch the bird perched on. The diminutive eastern screech owl watched me approach and stand below, it’s gaze, cat-slitted and yellow, met mine. Wind ruffled its feathers.

The old stories say when an owl enters your life, it’s a visit from the spirit world. As a totem spirit animal, the belief centers on an upcoming change in your life. Even today’s mail contained an owl, a snowy owl on the front of an art supply catalog.

Part of me dreads change or the possibility of an imminent death, another myth associated with Native American owl lore I discovered as a tween from the book, Mrs. Mike, by Benedict Freedman.

Despite four lessons prior to and this one in The Course in Miracles, I’m not prepared for change or loss. The mantra “I am never upset for the reason I think” is to gain peace of mind over troubling thoughts. It’s training the belief that every worrisome thought, emotion or issue is equal in intensity since they all create distance from abundance and a tranquil mind.

Like the blue jays yammering at and tormenting the owl until it left to find freedom from disturbance, I need to release the idea that a change is equal to a death, and recognize that a different place can be as simple as a change in my inner voice.

A one-generation-off-the boat demi-Sicilian.
View all posts by fragmentsandthoughts →
This entry was posted in Uncategorized and tagged #courseinmiracles. Bookmark the permalink.